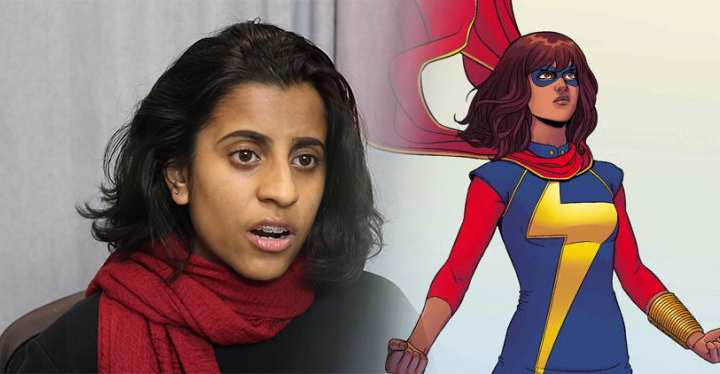 Casting is well underway for Marvel Studios’ upcoming Disney+ series Ms. Marvel. The show is expected to stay true to the comics and cast Pakastain decent actors for lead roles in the show. It was also revealed by Geeks World Wide that casting is also underway for a rebooted version of the Inhumans Royal Family including Black Bolt and Maximus. This is all based on the fact Ms. Marvel happens to also be an Inhuman after she goes through Terragensis.

Now we at Knight Edge Media have uncovered an audition tape by an unknown actress reading for the part of Kamilia Khan aka Ms. Marvel. In the tape, she is having a conversation with “Cap” assuming this is Captain Marvel (played by Brie Larson in the films) about The New Avengers. As in the comics Captain Marvel originally went by Ms. Marvel before passing off the title to Kamila. The tape also reveals that a worldwide Terrigan Wave (Terrigan Bomb in the comics) sweeps over the planet and activates her powers.

Captain Marvel – “Is everything ok?”

Captain Marvel – “What about you Ms. Marvel?”

Kamala Khan – “You want to talk about me? Ok? So. First I was bitten by this flying radioactive super-soldier serum. Next to this Gamma Bomb test and I saw…”

Captain Marvel – “Every hero. All these heroes had to rise to the occasion. Haven’t you had a day like that?”

Kamala Khan – “I’m not like these guys?! I’m just a teenager. I was just watching The Avengers fight some bad guys one day until the Terrigan Wave spread across the planet. I mean one of my ancestors was an Inhuman. So the terrigan must have activated my powers. And that’s it. That’s how I became Ms. Marvel.”

Captain Marvel – “No. That’s how you got your powers. But what made you ‘Ms. Marvel’?”

Kamala Khan – “I guess. I guess it was a few days after I got my powers. I saw this bus. I was walking and I saw this bus and it was out of control. I mean I didn’t know what to do. I was just standing there. And then I realized the longer I stood there and did nothing. The more likely someone was gonna get hurt. So I just used my powers. I stretched my arms. I pushed everyone aside. And I just stopped the bus. I mean I might have puked a little bit afterwards but at least no one got hurt.”

Captain Marvel – ” Come on, you didn’t become Ms. Marvel when you got your powers.”

Kamala Khan – “I became Ms. Marvel when I used my powers for good…You really think I can do this?”

Captain Marvel – “Of course I do. You’re here because the team believes in you. That makes you an Avenger. Now show them what you got.”

Kamala Khan – “Thanks Cap. Hey, I was wondering if after training you wanted to hangout…Ok [nevermind]”