Today, the very first trailer for Sony’s second Spider-Man spin-off movie Morbius debuted. While many saw the leaked image of Spider-Man on the wall with Doctor Michael Morbius running by many didn’t release the big reveal at the end of the trailer. It shows Vulture (played by Michael Keaten) meeting up with Morbius. This would be the first time that an MCU character has crossed over into the Sony Spider-Verse. Even though there have also been rumors that J. Jonah Jameson (played once again by J.K Simmons) will also appear in the movie; it was unknown how extended the MCU will bleed into the Sony Spider-Verse.

According to Deadline when Sony and Marvel were in negotiations to allow Tom Holland to remain Peter Parker in the MCU some give and take was given by both companies. Originally, Kevin Feige wanted control over all the Spider-Man spin-off films moving forward. Something Sony and producer Avi Arad did not want to give up. So they created a “Call and Answer” model between the two studios. “We hear that as Sony progresses their own Marvel universe with titles likes Venom 2 and Sinister Six, and Disney/Marvel their own, there could be a “call and answer” between the two franchises as they acknowledge details between the two in what is would loosely be described as a shared detailed universe.” Sony will continue to create its spin-off films that will be loosely connected to the MCU (think the Marvel Netflix shows). However, the MCU will not be directly tied into the events of the Sony Spider-Verse but the option will be open to eventually integrate them both if the studios see fit. There was a rumor that the Sony Spider-Verse takes place on a separate earth within the multiverse with Tom Holland appearing in Venom 2 as an alternate Peter Parker but nothing has since come of that rumor.

Venom 2 is currently filming and we’ll see how far Sony goes to create their own Spider-Verse without Spider-Man (for the time being) and how this will lead directly into a Sinister Six crossover event film. Something the studio has been trying to create since The Amazing Spider-Man in 2012.

#NYCC is doing LIVE YouTube Panels instead of pre-recorded panels....the way it SHOULD have been

From what I understand...#TronAres isn’t a direct sequel of #TronLegacy. 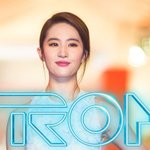 So the new Tron movie is indeed titled TRON: ARES